Hello world….ok well at least the few of you who do read the blog, yes I am back. My husband and I were on a short vacation and I felt that it was more important to focus on our time together, since this was the first real vacation we have had now that our children are grown, than on making sure I had a blog post ready to go. I have to say that we learned or were reminded of several lessons and of God’s greatness while on our vacation.

Our trip took us about 4 1/2 hours away from home so we drove to save money. We left late on Tuesday and stopped when we got tired. The first lesson I learned is that when I am tired I do not exactly exhibit the fruits of the spirit. I use a popular app to book our hotel rooms, so I was utilizing it after midnight to see where we could find a place to lay our heads and get the sleep our bodies were beginning to seriously crave. I booked the room, but was having a hard time because it would not allow me to book for the exact night since it was after midnight. Anyway, we get to the hotel and walk in. It had gotten a descent review from travelers, but it did not look or smell the cleanest. The gentleman at the desk was less than accommodating (did you see what I did there?) and indeed was rude and nasty. Instead of calmly explaining the workings of the app that I had used, having me cancel the present reservation and taking us as a walk in, he decided that it was his duty to tell me how ignorant and stupid I was for not understanding that the app had made the reservation for the following night. My husband and I decided that it was our time to leave. I was angry and had increasingly lost the ability to “love my neighbor as myself”. We traveled a little further down the road to the next city, found a hotel that was in the same chain and a nice older gentleman displayed, patience, kindness, goodness, gentleness, and self-control all while finding us a room. He helped me regain my ability to have patience when dealing with other humans.

We arrived at our destination on Wednesday, after a few stops along the way just because we could. We settled in to a very nice room that had a little kitchenette that aided in our ability to save more money by purchasing food at a local grocery store. We were then able to either return to the room for all our meals or pack a lunch and snack for our adventures further out. We had decided to visit West Virginia. We reside in Pennsylvania and I love to explore the United States rather than traveling abroad. I had been through West Virginia and stayed overnight, but never explored any part of it. We stayed in Morgantown which is the home of West Virginia University and some of the hilliest roads I have ever seen! Even the university is built around this hillock filled hamlet. The first two days we explored all around where we were staying. We fed giraffes at Hovatter’s Zoo, we saw glass that had been created and fired many years ago there and went to the West Virginia Botanic Garden where we walked around the reservoir and were warned about sightings of bears and then checked out some of the buildings of the university.

On the third day we drove to Seneca Rocks which left us in awe and wonder and pondering how anyone could deny the majesty of God when looking at this beauty as is stated in Psalm 65:6-8, “6 Who establishes the mountains by His strength, Being girded with might; 7 Who stills the roaring of the seas, The roaring of their waves, And the tumult of the peoples. 8 They who dwell in the ends of the earth stand in awe of Your signs; You make the dawn and the sunset shout for joy.” We also visited and toured a cavern in a resort called Smokehole which can be found in the depths of the mountains surrounding Seneca Rocks, and then to Blackwater Falls where we walked up and down over 400 stairs. 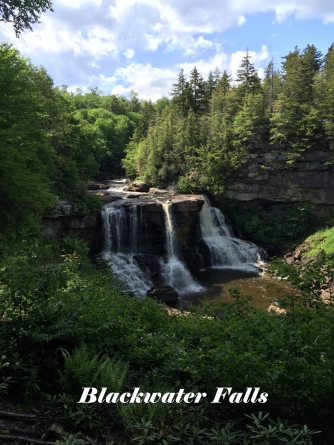 If you needed to disappear this would be the place to do it; no cell service, wide open spaces and a depressed economy, but beauty that takes your breath away. While the rock formations and the mountain air were wonderful and a complete demonstration of God’s ability to create something out of nothing the lesson that came on this day was while we were in the car, not admiring the grandeur. Traveling out to Pendleton County we found ourselves on windy mountain roads that had us hoping the brakes would not overheat or we would meet our demise rolling down the mountain. We also were amazed that there were no highways as we know them to be, and there are very few straight roads and if they are straight it’s only because they are going up or downhill. We stopped at a very nice park and had a lovely picnic lunch before coming upon Seneca Rocks, maybe that is why we hadn’t paid much attention to the time we spent traveling there. On the way home was another story; we were tired, and in need of rest, so we started back “home”. It felt like we had been traveling for days, the GPS never seemed to move and the roads all began to look the same. I looked down at my phone which we were using for directions and we had only 33 miles to go yet it was going to take us an hour to drive that distance; twice the time it would take us if we were at home! 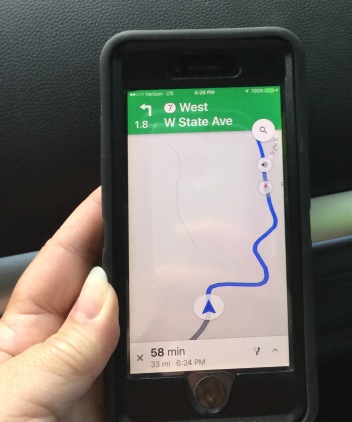 THAT is when I was stupefied by the thought that no matter how fast I would like the time to go to be able to get to the hotel, take a nice hot shower and rest while watching “Fixer Upper” we were not going to get there until we had completed the drive necessary in the place that we were. In other words; all in God’s timing.  I am not good at waiting for God’s timing to come about, but in the car 33 miles away from our destination and no faster way to get there I was forced to comply. It was quite eye opening to realize that if I could be patient enough (ok not really patient, but close) to not start crying over the distance and time required to meet our goal while trapped in a car, then I could do it when I was not at the mercy of West Virginia roads. Quite a revelation for me.

Who knew that God could teach even the simplest of lessons to understand, but hardest to comply to on a windy road in West Virginia, on vacation with the love of my life.